Information and documents related to Palazzo Priuli in Santa Sofia are still few, despite the building shows the characters of a good quality salient architecture, can be dated almost certainly in the second half of the 16th century. The building appears in some 16th century iconographies. In particular a drawing attributed to Antonio Visentini (1688-1782) shows one plan and the main façade of a building that are entirely attributable to our palace. The building has a rectangular shape, divided, in its interior, according to the classic tripartite typology of fondaco palace: a corridor- saloon on the ground floor, on whose sides fit the staircase and the siderooms. The hallway, on the main floor, gives birth to the main hall, denounced outside by the openings of the main façade. The building develops in height on three main floors (ground, first and second floor) and two mezzanine levels, one of which is placed on the sides of the entrance hall on the ground floor (over the warehouse- rooms), while the second one divides the height of the side rooms of the first floor, in correspondence with the hall of honour. On the second floor, currently property of three different owners, is accessible by a campiello, through a recent staircase. Outside, the façades grows on three sides: the main one facing the north towards canal Priuli, the east one overlooking the campiello, and the last side facing the south towards the inner courtyard with its garden. The west side is characterized by a building adjoining with volume and height similar to ours. At the Centre of the façade, two overlapping serliane break the rhythm of the horizontal string courses and show the development of interior spaces. On main floor there is an overhanging balcony that develops along all the width of the window. The balustrades of parapet are similar to those of the second order of the Procuratie Nuove in San Marco square, designed by Vincenzo Scamozzi, which in turn seems to take inspiration from the architectural language of Jacopo Sansovino (Libreria Marciana, Palazzo Corner in San Maurizio, Palazzo Zen, etc.). Some modillions reminding Sansovino’s ones, with superimposed eave cornice, concludes the building. Equally, the doubling of vertical stone elements denounces the end of the corner. 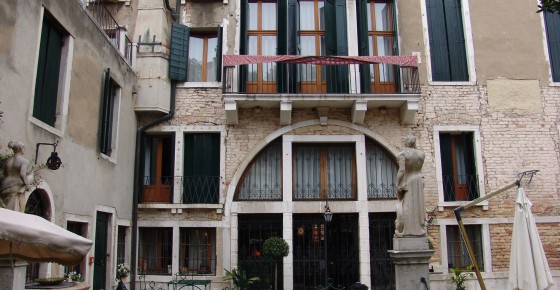 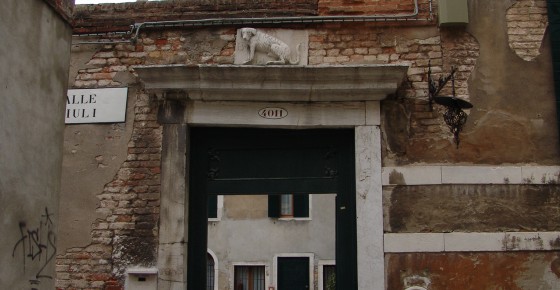 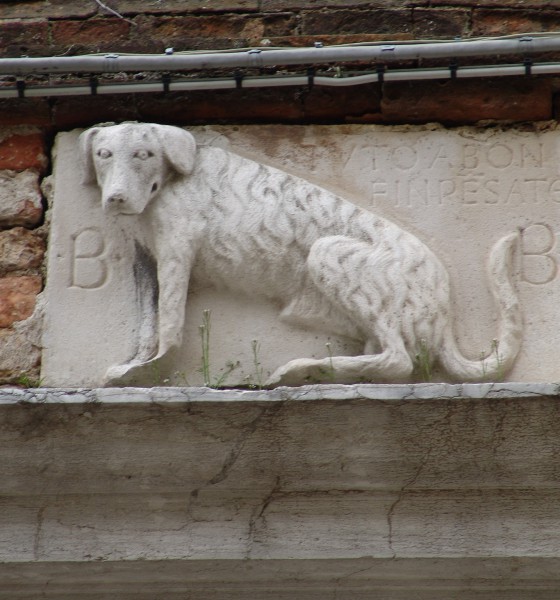 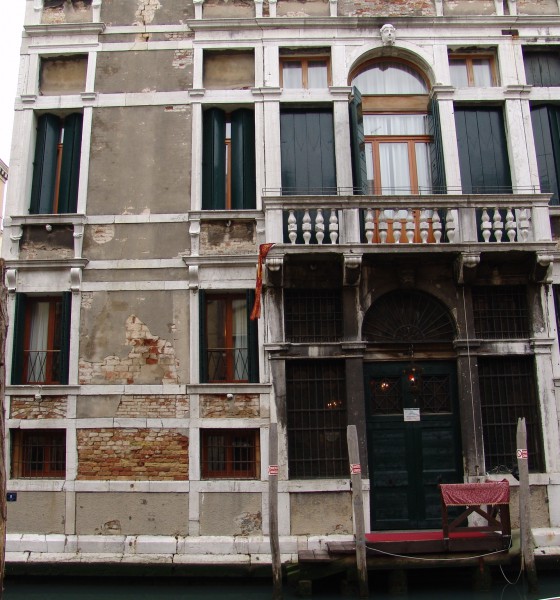 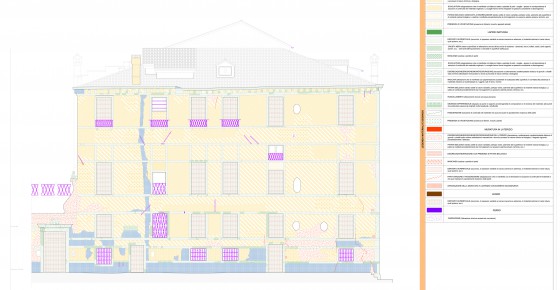 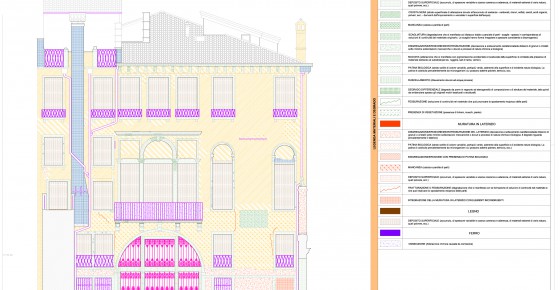 The analysis of materials and decays were based on the visual recognition of the materials themselves, their shape, size and position in the building and on the type of disease. These first data, associated with the visual analysis in situ, the comparison of materials and decay investigations, allowed to indicate on the photo-plans an initial identification of materials on all exterior elevations. The identified interventions are aimed at the preservation of historical materials, safeguarding what found and supplementing where necessary. The roof was completely recovered, making a new waterproofing completed with cork insulation on all coverings. 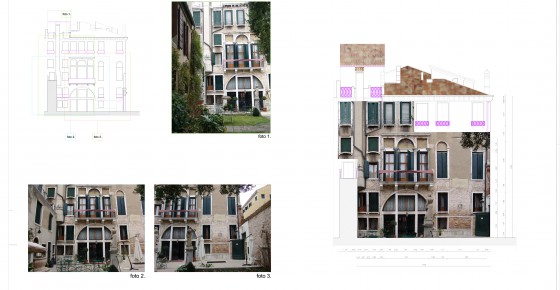 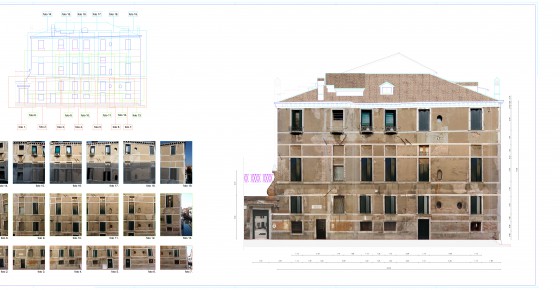 The works were performed in an agreed and reduced time, in view of the use of the building as Residenza d’Epoca. Below the roof, completely recovered, integrating only the elements particularly damaged, an insulation in cork panels of 5 cm height has been placed. External stone elements have been subjected to the removal of coherent deposits, making wraps with ammonium bicarbonate, which given the resistance of deposits, had to be repeated several times and with application times of several hours. The fragments of plaster have been retained and supplemented by a new layer of lime plaster and marble powder. 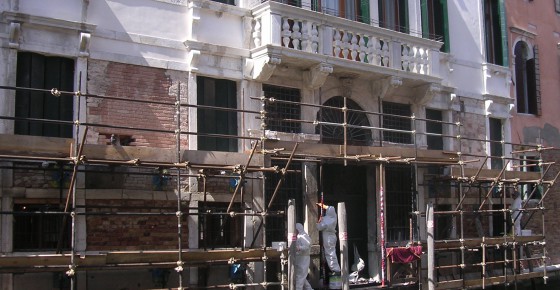 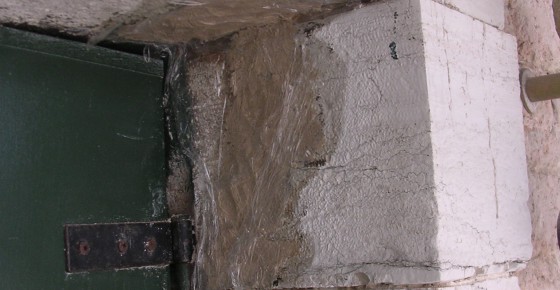 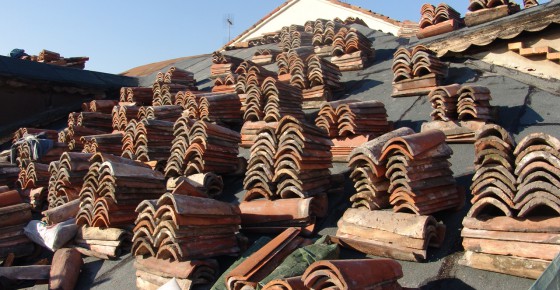 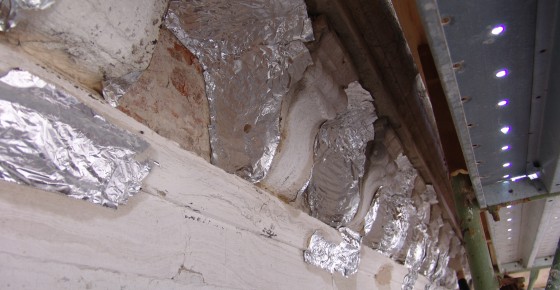