The exteriors of the building Cigola-Martinoni are organized in two separated green areas and divided from the west wing of the same architectural complex. The court and the park constituted, already in the seventeenth century, the spaces of the architectural complex of Palazzo Cigola Martinoni and become municipal property in 1986. Nowadays, the two areas have different surfaces, functional purposes and organization of spaces; in fact the east Park covers an area of 2738.50 square metres and is a semi-public space set as green area and courtyard, while the west Park covers an area of 8549.80 square meters and is a public space with equipments for children playgrounds and temporary structures for village festivals.
From historical pictures and gathered information it’s possible to highlight three main historical phases: first the current court of the Park was divided by a wall, now vanished, that had at its centre an access path. In a second phase, as a result of the fire that between 1852 and 1895 destroyed the building body developed towards the south, the entrance was moved to its current location, determining the nowadays size of the court. The green setting of the area has been then modified, in an undefined period, with the removal of the circular flower bed of the courtyard. As for the rest of the context, it is interesting to note that in the 18th century the west park, despite being of bigger dimensions, was considered of secondary importance and characterized by a geometric design typical of Italian gardens, but weakly organic, while the square of Europa street did not exist yet.

The court was characterized by a clear separation between the front of the palace in gravel and the southernmost area where the garden develops according to the “English” model with a large area intended as lawn, a corner area used as icebox and the rest part covered by a dense tree group. This one is constituted by trees of different species and sizes and by some shrubby groups that branch off from the bottom of the property and continue along the sides of the wall expanding irregularly along the three earthen paths that reach the altitude of 2.10 meters near the east perimeter. Regarding the area next to the parking in Europa street, it is a smaller surface with a lower density of vegetation, mainly concentrated along the slope that borders to the west. 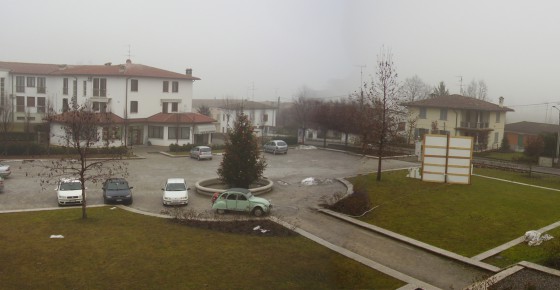 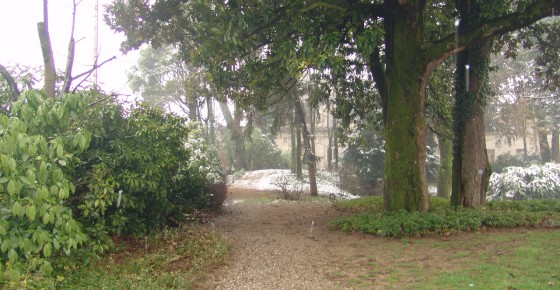 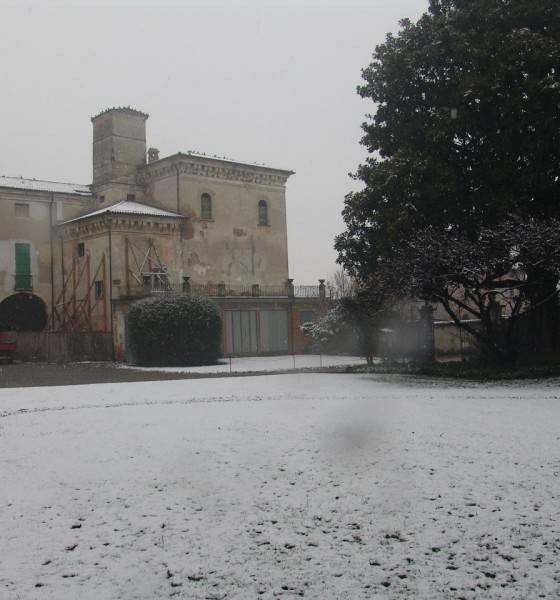 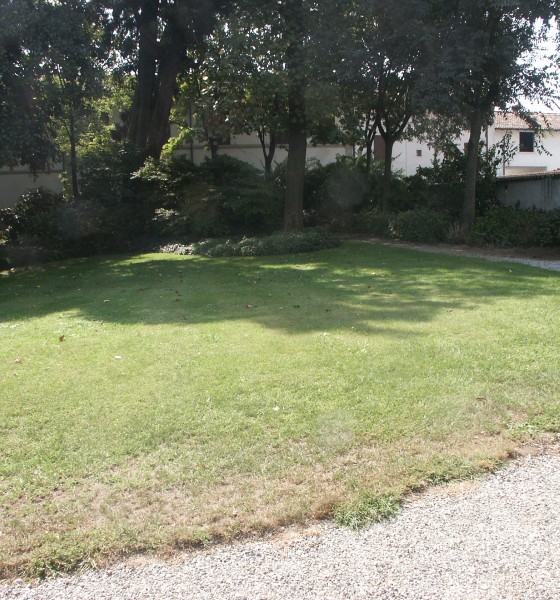 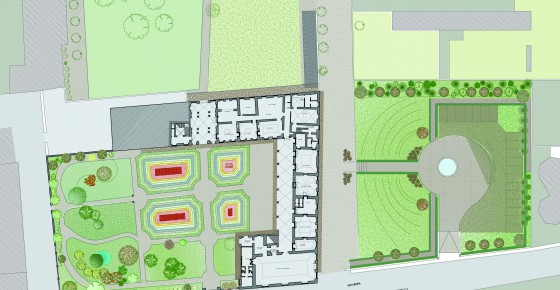 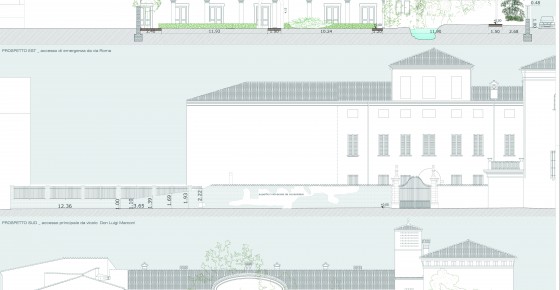 We have carried out a verification of single trees and identified those that needed pruning and culls. Soil movements, traces of undergrowths and paths, views that characterized the garden, altitudes, the pond, the cave and the traces of masonry have been detected.

The proposed intervention totally keeps the tree component and much of the shrubby one, organizing around it the reformed design of the garden and identifying in trees and accesses, existing and existed, the priorities of the project. This scenario is so developed in the initial part of the court (to about 950 square meters of extension), until what was the ancient boundary between the garden and the 17th-century square, which is so recreated and especially underlined by the insertion of an arch along the main access. Beyond this imaginary border there is the contrast inclusion of four new flowerbeds with the typical geometric shapes of the Italian garden, surrounded by an evergreen hedge in Bosso, becoming the place for bulbous crops (Daffodils, Hyacinths, Tulips and Crocus), English Rose bushes and other annual variety of different colours, to to ensure a continuous blooming from February to October. 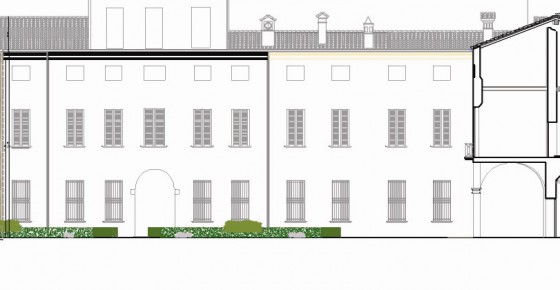 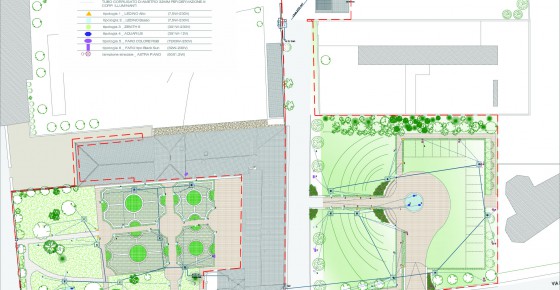 The spaces kept turf are raised of about 10 cm compared with the existing plan and contained from both sides by a steel blade which defines the margin raised from the rest of the lawn, allowing to create a scenario as natural as possible. The walkways are made of stabilized gravel pavement, bound with mortar for vehicular and pedestrian areas of north park and beaten earth for all paths of the garden court. All spaces are illuminated with led lamps along walkways, along treadable paths and inside the fountains. 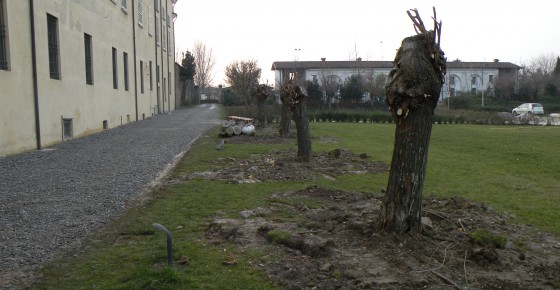 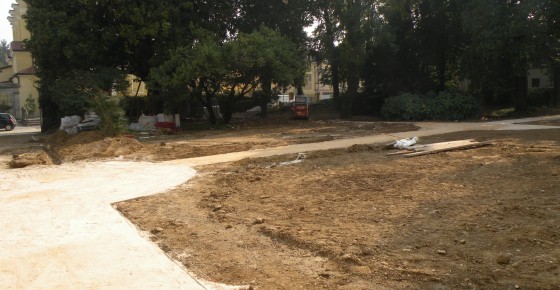 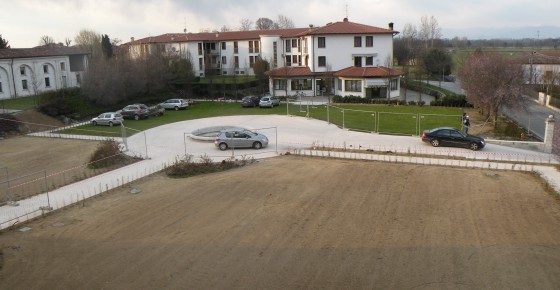 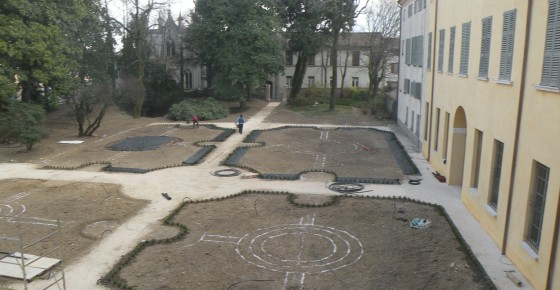